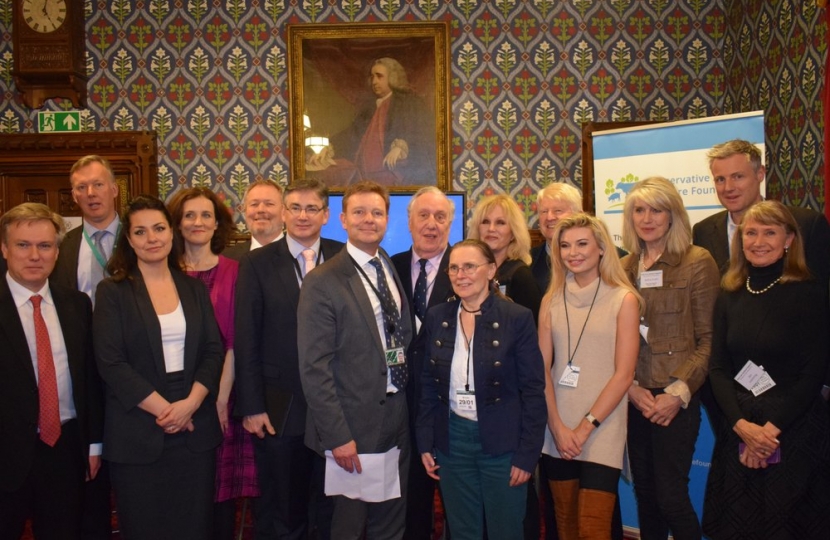 Craig Mackinlay MP has hosted an event in Parliament as part of his campaign to persuade the Government to end live animal exports for slaughter once the UK has exited the European Union.

The event, attended by over 30 MPs, and supported by action groups such as Compassion in World Farming and the RSPCA, was also attended by celebrity supporters including Selina Scott, Joanna Lumley, Frederick Forsyth, Jan Leeming and Sir Ranulph Fiennes.

In addition Chipping Barnet MP, Theresa Villiers’ Live Animal Exports (Prohibition) Bill will have its second reading in the House of Commons on 2 February and a parliamentary debate on the topic is now scheduled for 26 February. An online petition also continues to attract support from the public.

Craig has long argued that Brexit is an opportunity to improve animal welfare given that existing EU legislation forbids member states from outlawing live animal exports for slaughter.

During the course of this trade animals are sent sometimes without a vet, water, or food in cramped conditions, across many hundred miles to face conditions of slaughter that we would find abhorrent.

“The live animal export trade in the UK is now wholly focused on Ramsgate in my constituency and I remain committed to do all I can to see this inhumane trade stopped.

“That’s why I’m so pleased to have hosted this event and to have secured the support of so many MPs, celebrities and animal welfare groups.

“The pressure that those of us involved in the campaign are bringing to bear on the Government to finally put a stop to this barbaric practice will hopefully be reflected in a future Agriculture Bill that will set out the framework of post-Brexit farming.

“On this issue, I will not stop until we are successful.”

“It was inspiring to see so many people gathered together who have campaigned for years to end live exports.

"I will continue to work with Craig and other colleagues in Parliament who want to see this trade banned once and for all. Inflicting this needless suffering on animals is not acceptable and it must be stopped.”