HUNT AND MACKINLAY: OUR COMMITMENT TO BUILD A BRITAIN THAT OFFERS TRUE SECURITY IN RETIREMENT 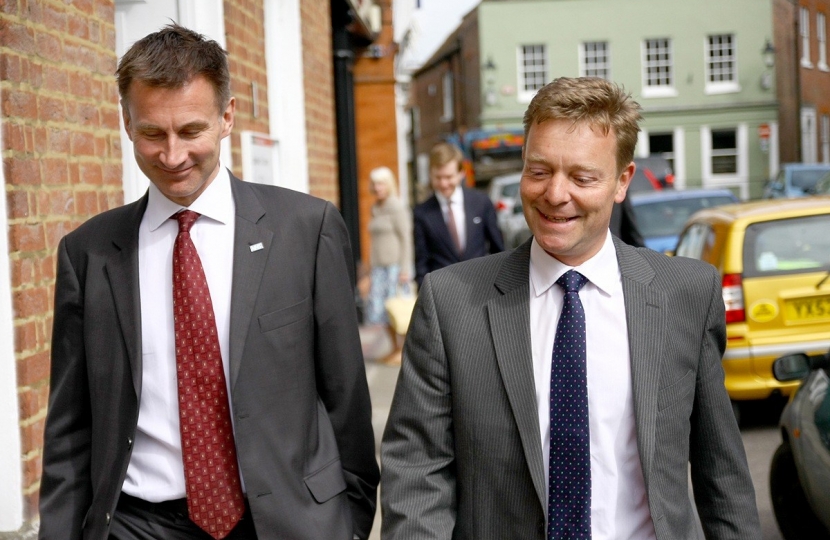 Health Secretary Jeremy Hunt and parliamentary candidate Craig Mackinlay highlighted their commitment to build a Britain that offers true security in retirement when they visited an Age Concern centre in Sandwich on Monday.

The pair joined a watercolour painting class before touring the centre and meeting staff, volunteers and clients.

Mr Mackinlay said: "It was fantastic to bring Jeremy to visit what is an extraordinary local community organisation.  The staff and volunteers provide a great service for local people.

I was glad to be able to promote their valuable work by bringing it to the attention of the Health Secretary. As part of a Strong Conservative team I can champion local causes and get things done in Sandwich and elsewhere.

My aunt who had severe Alzheimer's recently passed away and my grandmother who lived to 93 suffered from dementia.  I'm also a trustee of an almshouse with elderly residents so Age UK is an organisation close to my heart.

Building a Britain that offers true security in retirement is a Conservative priority. Gone are the days when Labour insulted the elderly with pension rises as low as 75p a week.  We have brought in a ‘triple lock’ which ensures that pensions rise properly every year. Since 2010 the basic state pension has risen £950.

For those who want to carry on working after 65 we have abolished the default retirement age. This means people of 65+ now have exactly the same job security as young people.

We have also protected universal pensioner benefits like the Winter Fuel Allowance, free TV licences, bus travel and prescriptions, and would continue to do so over the next five years.

Mr Hunt said: "The dedicated volunteers at Age Concern do so much to support the elderly and vulnerable in Sandwich and the Stour Villages.  I was delighted to visit Sandwich Age Concern at Craig Mackinlay's invitation to hear about the real differences some of the Government's policies have made here in Sandwich.

Nationwide, our plan for the economy means we can afford a strong NHS. There are now more than 9,000 more doctors, 2,000 more midwives and 6,000 more nurses working in the NHS than there were in 2010.

We are investing £5.3 billion to join up health and social care services so that patients get the right care both in hospital and the community.

We are also expanding help for people with dementia.  Over one million people have already become ‘Dementia Friends’, with a better understanding of dementia and how to best support people with the condition – and we will train another three million."