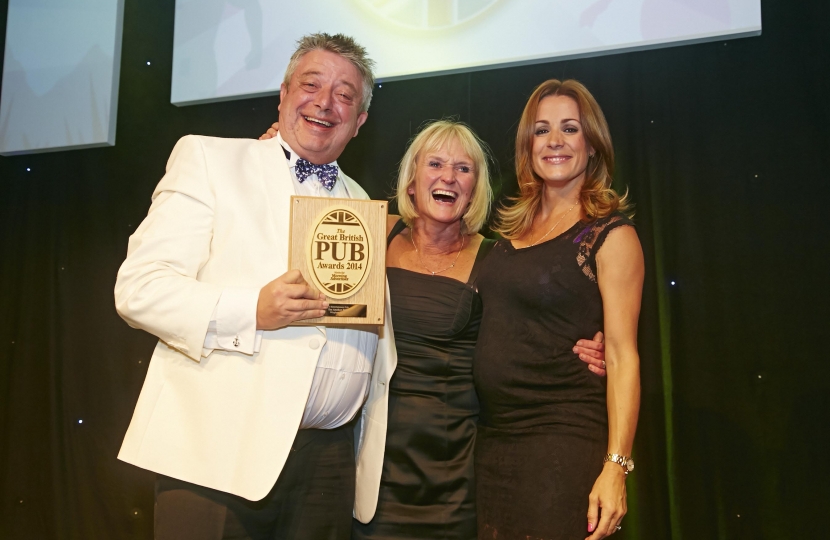 A Kent pub has won acclaim for the quality and success of its entertainment offer.

The Anchor Inn, in Wingham, has been named Best Entertainment Pub national champion at the Great British Pub Awards 2014.

The awards, organised by leading pub industry magazine, the Publican’s Morning Advertiser, are recognised as the ‘Oscars’ of the pub world.

The Enterprise Inns pub, run by Kevin and Michelle Abbott, had already been named joint winner of the South East & London region.

It competed against the Prince Albert in Camden, north London, plus other regional winners for the overall title in a rigorous judging process, which included site visits and interviews about the business.

The award’s 90 finalists were shortlisted from hundreds of pubs at an initial paper judging stage.

The award follows on from the Abbott’s success at last year’s Great British Pub Awards, when they were crowned Best Newcomer 2013.

Since winning last year’s award, they have refurbished an upstairs function room, added a new sound system, and repainted the trading areas.

As well as regular free open mic nights in the bar and ticketed events in the function room, which are nearly always sold out in advance, the Anchor now hosts two three-day music festivals every year.

The Abbotts are also launching a bar in Spain and are looking to establish a pop-up bar and stage area at local events.

Rob Willock, editor of the Publican’s Morning Advertiser, said: “Kevin, Michelle, and her team at the Anchor thoroughly deserve the title of Best Entertainment Pub 2014.

“Judges were impressed with the way the couple refuse to rest on their laurels and consistently conjure up new ideas to retain and grow custom.”

Willock added: “The Great British Pub Awards celebrate the cream of the crop in the pub trade, and the winners should serve as an inspiration to pubs throughout the country.”